How iOS14 Will Affect Your Organization

It’s been a few months since Apple completely changed the rules of online advertising. We know that most nonprofits don’t have large online marketing departments and that many were caught unaware by the release of iOS 14.

In fact, I suspect many organizations today are still puzzled as to why their campaigns aren’t performing like they used to.

In this article we review the main challenges introduced by Apple, how they affect advertisers globally, and the best ways to continue conversion campaigns given this new reality.

But first, let’s quickly revisit how the Facebook algorithm works. The answer is: based on the user's information. To put it simply, as a nonprofit marketer, you set a Campaign Objective on your campaign (ie. Conversions) and you set what defines a Conversion through the Facebook pixel. The most common Conversions within nonprofit organizations are donations, subscriptions, sign-ups, and registrations (to webinars or newsletters).

In the old iOS 13 days, it was possible for nonprofit marketers to select any event on their website and use that information to create audiences. That would allow them to identify users that already showed some interest in their services or causes and move them further along in their journey.

An example of this would have been a user seeing an ad on Facebook inviting them to become a volunteer. Imagine this user clicked on the ad, read a bit and clicked on the registration form but, for whatever reason, left the website before filling out their information.

This user is really valuable, because they showed a lot of interest in their program. Not only did they click on an ad, but they also spent time reading and even began the registration process.

With Facebook's Audience tool, the right approach would have been to create an audience to target anyone who made it to the registration form but didn't complete it. This audience would be retargeted with a different ad tailored for people who already knew what the program was about.

From registration forms to store purchases, the same logic applied: find your potential consumers/followers and try to get them to complete the journey.

From the nonprofit marketer's perspective, this audience advertising and journey-based strategies were almost perfect. You could have every step of the way carefully monitored, planned, and working to grow your base or business while you focused solely on the quality of your services and your creativity in telling your story.

However, the old iOS wasn’t exactly great from a user privacy perspective. At the end of the day we’re all users, even advertisers and marketers. All of us could see how ads were slowly eating our feeds and how they could on occasion drift into straight out creepiness.

In an effort to preserve user privacy a bit more, on September 14th of last year Apple launched iOS 14 with a warning that sooner rather than later there would be a release that would by default, opt-out users from tracking. Users would have to explicitly opt-in to tracking. And so the game began.

Preparing for the Big Launch

Earlier this year, Facebook started to warn their advertisers about the changes that were coming and set a list of actions that could be taken to minimize its impact. (Please see this reference from Facebook´s support site)

Many articles were released closer to the date of launch to educate advertisers and to help them avoid being caught flat footed.

Major changes and suggestions were based on app-tracking, data collection and, most importantly, reporting and attribution.

Apple's biggest change was to the use of Apple’s Identifier for Advertisers (IDFA), which is Apple's cookie that allows tracking on iOS devices.

Before, Apple device owners were automatically opted-in for tracking but had the option to opt-out. Now, following the update to iOS 14.5, iOS users are prompted and asked if they would like to be opted into being tracked, with the default now being opt-out.

According to several studies, when iOS 14.5 prompts began, an estimated 2% of users opted-in to tracking. That number has steadily increased since the end of April, but it still sits at around 20%.

What Is the Impact on Campaigns?

Between fewer tracked mobile conversions, delays in reporting, and a lot less data coming from Facebook, it’s no surprise the numbers you may be seeing in Ads Manager are going down.

This does not mean that Facebook has stopped being a reliable source of leads and potential consumers. It means that for nonprofit organizations and marketers, it is time to look at the bigger picture and not just the numbers reflected on your Ads Manager.

It is time for marketers to work harder on Mid-funnel events, ie. "View Content." In this below example from a nonprofit organization’s store, their website is still generating a high percent of conversions after a user views their content. To increase purchases, they need to focus on increasing the number of users that make it to the "View Content" step of the funnel.

It is very important for marketers to know that there will no longer be a way for us to attribute an increase in sales to specific campaigns, but if the change is sustained over time using this strategy, then it makes sense to assume that we are doing things right. 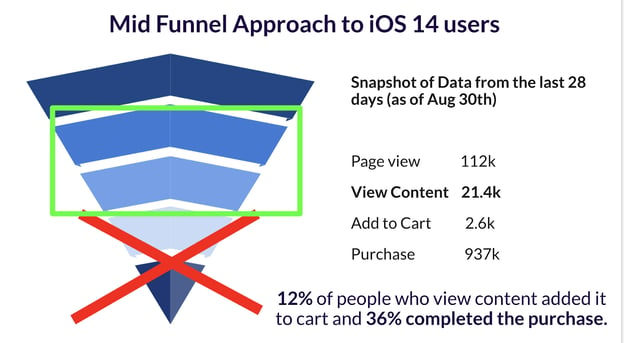 2. Conversion Rates are inconsistent and not reliable.

It is possible that one of the major impacts advertisers felt right after the change was the big drop in numbers on all their ongoing and evergreen campaigns. Due to the sudden increase in iOS 14 users who opt out of tracking, marketers should expect a certain amount loss, potentially leading to weakened delivery optimization and potentially higher CPAs.

Related to the topic mentioned above, since we just lost tracking on a large percentage of mobile traffic, retargeting based on website user behavior became hard to track.

Any website custom audiences created during or after the iOS 14 implementation (going back to September of last year when the iOS update was first released) have undoubtedly seen a reduction in the number of targetable people within those audiences . Meaning that, as of today, we would be looking at almost a year of data gone.

Go back to the basics. It's nothing that marketers, at least those with more than a few years' experience, haven't done before. Rely more on first-party data (custom audiences based on emails/phone numbers, etc.). using other engagement-based retargeting audiences you used to have (people who have interacted with your ads, etc.).

Lastly, for all those branding lovers, who like us, found it really hard to justify the spend on upper funnel events in the old days, video-based retargeting audiences look sexier than ever. Watching several seconds of a video has proved to be really effective in the past, but was still considered a low-intent event, until now.

As for my personal take, nothing is completely lost. We're probably going through the biggest challenge in digital advertising in a decade. It’s time to get creative and test, test, test. Testing has always been key in marketing, but now more than ever.

It’s no secret that websites are one of the main tools that nonprofits use to attract prospects,...

From socializing with people to researching topics we’re curious about, technology has transformed...